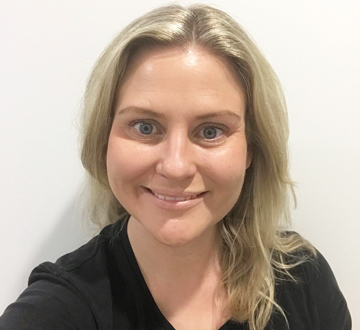 “I have always felt valued in the various roles I have had, and I knew there was plenty of opportunities for me within the MedHealth group of businesses.”

Georgia Miller is born and bred in Western Australia, but made a big impact working in Tasmania, where she helped to establish IPAR as the leading rehabilitation and return to work provider. She made a significant contribution to improve the lives of others in the community, all the while bringing up a new family and finding the flexibility to thrive.

My career journey with MedHealth

I graduated as an Occupational Therapist is 2010 and started work as a new graduate in a Rehab Consultant role with Active Injury Management in Western Australia. The company was soon acquired by IPAR, and I became a Senior Consultant.

In 2014, I was fortunate to be offered a new role in Tasmania, starting up our IPAR business in Hobart and Launceston. It was such an amazing opportunity for me. My husband was from Tassie and it’s such an incredible place to live. I became the Area Manager and looked after the growing IPAR business in Tasmania. We really made a difference to people’s lives and improved the outcomes for both injured workers and people injured in road accidents in Tasmania. It was very fulfilling.

During this time, I was mentoring and training new recruits, mostly from the mainland and when I had my children in Tasmania (3 little boys), I was able to take time off for them and had the flexibility of shorter weeks to be with my family. I am so proud of the contribution we have made to the Tasmanian community in rehabilitation, and the wonderful team that continues the great work in improving people’s lives.

As my children reached school age, we felt the need to return to Western Australia to be with other family members, friends, and those beautiful WA beaches!

In 2020, I secured a secondment management role with IPAR and after six years, we returned to Western Australia, and I eventually became permanent as an Area Manager of the Western Australia and Northern Territory IPAR business.

I have always felt valued in my various roles, and I knew there was plenty of opportunities for me within the MedHealth Group. So, after 10 years with IPAR, I wanted a new challenge, and an opportunity came up with JobAccess – helping people living with a disability to be supported in the workplace. I started as Manager at JobAccess for the Advisory and Employment Assistance Fund team in January 2022.

I have always loved working collaboratively with my teams and achieving goals together. We became the biggest and the best provider in Tasmania because we cared about our clients and made sure they received the best evidence–based support. It’s no different in my current management role at JobAccess, I am continually inspired and motivated by the work we do and the difference we are making to others.

Taking on the Tasmanian role was incredibly challenging. Initially, I was doing all the assessments and rehabilitation work, and we needed to get onto provider panels. There was no IPAR team established, I needed to build that team from scratch, and I had to understand the TAS workers comp legislation and Motor Accident Insurance Board complexities. But support was never far away.

It’s always been challenging and exciting, but never intimidating.  I have been very well supported by my managers and colleagues throughout my career with MedHealth. You can feel a little removed if you are out of the capital cities, but even though my manager was in another state I still felt well supported.